A single event stood out in everyone’s mind when Ophthalmology Times asked experts to think back on the year in glaucoma surgery: the July 29 approval by the U.S. Food and Drug Administration (FDA) of the CyPass Micro-Stent.

The CyPass, developed by Transcend Medical of Menlo Park, provides an alternative to the only other minimally invasive glaucoma surgery (MIGS) device currently in the U.S. market, the iStent Trabecular Micro-Bypass Stent System sold by Glaukos.

“There has been really a revolutionary change in our field since the introduction of the iStent,” said Andrew Iwach, MD, executive director, Glaucoma Center of San Francisco, San Francisco.

Since winning approval June 25, 2012, the iStent has soared in popularity, with implantations overtaking trabeculectomy as the most commonly billed glaucoma procedure in Medicare, Dr. Iwach said.

CyPass and iStent both provide surgical relief of IOP without creating a filtering bleb and its attendant risks.

More: Biosensors in contact lenses can monitor IOP and diabetes

Other MIGS devices achieved milestones on the route to the U.S. market in 2016.

Many patients today come to our offices with numerous questions about their eyes, and how they can care for them. Our staff is dedicated to providing the highest level of eye care, and is fully trained in all aspects of eye care. Below you will find many different eye conditions and their descriptions. We hope that this may answer some of your questions and help clear up some misconceptions about the eye.

Age-Related Macular Degeneration (AMD, ARMD) (MAK-yu-lur) – Group of conditions that include deterioration of the macula, resulting in loss of sharp central vision. Two general types: “dry,” which is more common, and “wet,” in which abnormal new blood vessels grow under the retina and leak fluid and blood (neovascularization), further disturbing macular function. Most common cause of decreased vision after age 60.

Blepharitis (blef-uh-RI-tus) – Inflammation of the eyelids, usually with redness, swelling, and itching.

Blepharospasm – An involuntary contraction of the eyelid muscle.

Cataract – Opacity or cloudiness of the crystalline lens, which may prevent a clear image from forming on the retina. Surgical removal of the lens may be necessary if visual loss becomes significant, with lost optical power replaced with an intraocular lens, contact lens, or aphakic spectacles. May be congenital or caused by trauma, disease, or age.

Corneal Ulcer – Corneal Ulcers usually occur after trauma to the cornea by a foreign body, also including contact lenses. Corneal Ulcers may also occur without trauma to the cornea like dry eye syndrome or lid disease which can allow bacteria or fungi to enter into the cornea and cause infection and inflammation. The infection may cause severe pain, produce corneal discharge, reduce visual clarity and perhaps even erode the cornea. Generally, the deeper the corneal infection is within the eye, then more severe the patient’s symptoms and complications may be. Infections such as keratitis, though relatively infrequent, are the most serious complication of patients who are contact lens wearers.

Floaters – Particles that float in the vitreous and cast shadows on the retina; seen as spots, cobwebs, spiders, etc. Occurs normally with aging or with vitreous detachment, retinal tears, or inflammation.

Glaucoma (glaw-KOH-muh) – Group of diseases characterized by increased intraocular pressure resulting in damage to the optic nerve and retinal nerve fibers. A common cause of preventable vision loss. May be treated by prescription drugs, laser or surgery.

Macular Hole – A Macular hole is a condition that affects the very central part of the retina.  A Macular Hole may happen for a variety of different reasons such as:  eye injuries, certain diseases, and inflammation inside the eye.  However, the most common cause of Macular Hole is related to the normal process of aging.

Vitreous Detachment – Separation of vitreous gel from retinal surface. Usually innocuous, but can cause retinal tears, which may lead to retinal detachment. Frequently occurs with aging as the vitreous liquefies, or in some disease states, e.g. diabetes and high myopia.

Conjunctivitis and Infection (kun-junk-tih-VI-tis)- Conjunctivitis, also known as, “Pink Eye.” Inflammation of the conjunctiva. Characterized by discharge, grittiness, redness and swelling. Usually viral in origin, but may be bacterial or allergic; may be contagious.

Dry Eye – When a patient does not naturally produce enough tears to keep the eye comfortable, this condition is known as Dry Eye Syndrome, or DES. In this condition a patients eyes feel dry or may even have a burning or stinging sensation. The burning or stinging sensation a patient may experience is due to an insufficient amount, or poor quality of tears being produced by the eye. Dry Eye Syndrome can be caused by a lack of blinking, use of some allergy medicines; can be due to aging, smoking, and even a dry or cold environment. For patients who use a computer for long periods of time, it is suggested that the patient make a conscious effort to blink a few times per minute while focusing on the computer screen.

Fuch’s Dystrophy – Fuchs’ dystrophy, also known as Fuchs’ endothelial dystrophy, is a slowly progressing corneal disease that usually affects both eyes, and is slightly more common in women than in men. Early signs of Fuchs’ dystrophy can be seen in people in their 30s and 40s; the disease rarely affects vision until people reach their 50s and 60s. Fuchs’ dystrophy occurs when endothelial cells gradually deteriorate over time without apparent reason. As more endothelial cells deteriorate over the years, the endothelium begins to pump less and less water out of the stroma. This causes the patients cornea to swell and distort vision. Eventually, the epithelium also begins to hold water, resulting in pain and severe visual impairment. Epithelial swelling will damage vision by changing the normal curvature of the patient’s cornea. By changing the normal curvature of the cornea a sight-impairing haze will appear in the tissue.

Herpes Zoster (Shingles) – Herpes Zoster, commonly known as “Shingles,” is a viral disease that causes a characteristic skin rash of fluid-filled blisters, also known as “Vesicles,” which form scabs and can leave permanent scars. Herpes Zoster commonly attacks the nerves around the eye, especially the nerve that supplies the upper eyelid and forehead. If the virus affects the nerves that connect directly to the eyeball, serious eye problems may occur, including corneal ulcers, inflammation and sometimes glaucoma.

Keratitis (ker·a·ti·tis)(Corneal Ulcers) – Keratitis is an inflammation or irritation of the cornea, often characterized by a cloudiness or loss of luster in this transparent membrane covering the iris and pupil. There are many types, causes and degrees of severity of keratitis. Generally, the infection occurs after the cornea has been injured or penetrated, allowing bacteria or fungi to enter and the deeper the infection, the more severe its symptoms and complications.

Ocular Herpes – The recurring eye infection of the cornea, which can potentially threaten sight, is most commonly caused by the herpes simplex eye disease known as HSV type 1. The infection may vary in duration and severity. The infections response to treatment may also vary depending upon which of the several different strains of the HSV type 1 infection caused the initial outbreak. The disease usually begins on the surface of the cornea, where the eye will turn red, become uncomfortable, and sensitive to light. The disease may even cause permanent scarring of the cornea and inflammation inside the eye in advanced cases. Also, chronic ulcers which can be difficult to heal may also develop on the cornea due to the HSV type 1 infection. Even though this disease may occur in one eye, it is unusual for the disease to spread to the other eye.

Diabetes can lead to damage of the tiny blood vessels inside the retina. Diabetic retinopathy can lead to visual loss if not treated.

Who is at risk for diabetic Retinopathy?

All people with diabetes.

Every diabetic should have a comprehensive dilated exam once per year. 40-45 percent of Americans with diabetes have diabetic retinopathy.

What are the symptoms of diabetic retinopathy?

Spots floating in your vision

How is it detected?

How is diabetic retinopathy treated?

Early diabetic retinopathy not affecting the vision may be monitored.

Injection of medications to relieve some of the abnormality

Surgery to remove the blood in the center of the eye

If you have diabetes you should get a comprehensive eye exam once per year.

Glaucoma is a disease of the eye that damages the optic nerve of the eye and can lead to vision loss and blindness. Early detection and treatment is recommended to prevent serious visual loss. 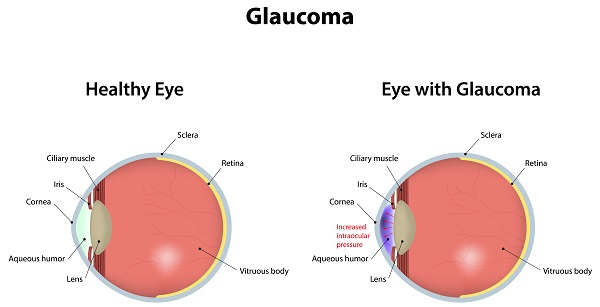 The risk factors for glaucoma include:

Trauma to the eye

Open angle glaucoma in its early stages has no symptoms. Without treatment patients can get constriction of their peripheral vision. Angle closure glaucoma is usually accompanied by pain and blurry vision.

How is glaucoma detected?

Glaucoma is detected through a comprehensive eye exam that includes:

Glaucoma treatments include medications, laser trabeculoplasty, surgery or a combination of all three. These treatments may help to stabilize vision but do not restore the vision that has been lost.

Glaucoma cannot be cured and the vision loss from the disease cannot be restored. Early detection is paramount.

To provide state of the art eye care, superior quality eye care to all: so that patients are satisfied, all their ophthalmic needs are met and they recommend us to their family and friends; physicians are happy sending their patients and employees are proud to be a part of the organization.